The proposal is to rethink geography as a process that comes out  from the post-1989. Why?  At that moment we have the appearance of two conditions, of two posts that coincide largely speaking geographically in Europe and that can subsumed, according to David Harvey writings in the 1980s,  as “urbanization of capital and urbanization of consciousness.” This double process is vital to capitalism’s survival as a dominant mode of production and consumption. Let’s state that this urbanization is a perverse cosmopitanism that Piotr Piotrowski (Piotrowski, “From the international to the Cosmopolitan” (2012)), sees as the possible approach to East and Central Europe today.  Therefore my proposal claims that geography can better be captured as the joint process of these two conditions postsocialist and postcolonial than divisions we used for the last decades in the former Eastern European context: East-West, center-periphery, etc. As well the question that we will enter is how the postcolonial enters the post-socialist of the East-Central Europe geography of today. My question is how these traumatic nodal points produced, executed and governed by and within Europe transform the perception of art, geography, topography, memory and history in the present moment. The elaboration is based on the new insights provided by the research project I am in charge at the Academy of Fine Arts in Vienna with the title “Genealogy of Amnesia: Rethinking the Past for a New Future of Conviviality” (funded through the Programme for Arts-based Research (PEEK), inside the FWF, Austrian Science Fund, in the period from 2018 to 2020). 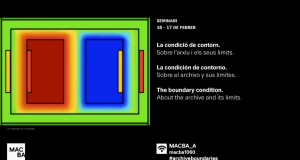 LECTURE at MACBA Seminar in Barcelona